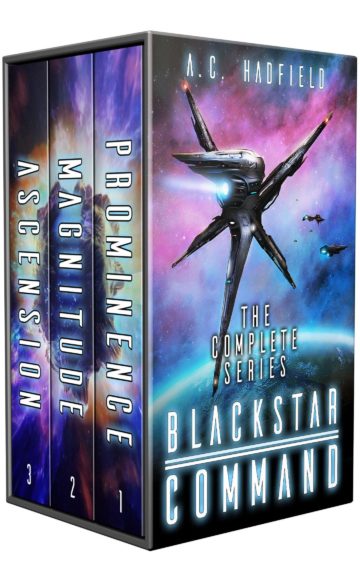 They tried to destroy our planets. Our way of life. They tried to send us into extinction. But we, the Coalition, fought them and won. That was a decade ago. We had assumed they were beaten for good.

They’re known as the Host: a cabal of aliens seeking to dominate our sector of space. And they’re back—with help from a powerful new enemy.

Against their wrath, we must stand. We’re outnumbered and unprepared. If we lose, we lose everything.

But there is hope. An ancient race of long-dead but technologically advanced aliens called the Navigators have a ship called the Blackstar that could potentially turn the tide. That is if I, Kai Locke, a humble ship racer, can find it and learn how to harness its power in time.

If I fail, the Coalition will fall, and the Host will consign us to a distant memory. I refuse to let that happen. I will fight to my last breath for the Coalition’s survival.

Buy this special edition omnibus to experience this complete Military Space Opera series from Amazon Bestseller A.C. Hadfield, including Book 3 being published for the very first time! Perfect or fans of Star Wars, Firefly, Battlestar, and Guardians of the Galaxy.