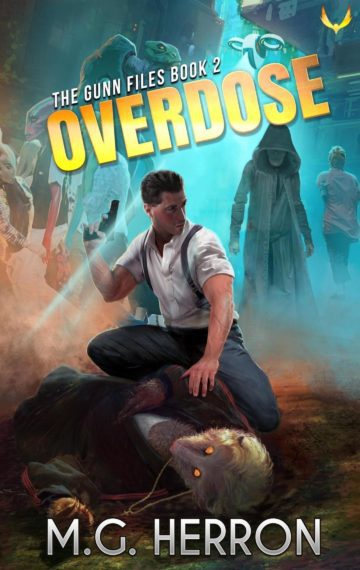 People say, “Keep Austin Weird!” If only they knew….

Bounty hunter Anderson Gunn has had enough of this alien stuff. He can accept that offworlders live among us. He can even be friends with them. But that doesn’t mean he wants to be involved in their affairs.

So, naturally, it’s just his luck that when Gunn tries to go back to his normal life of collecting bail-jumpers and minding his business, the Gatekeeper – Austin’s kingpin of extraterrestrial commerce – offers him a job.

Worse, after Gunn refuses to take the gig, his buddy Vinny winds up in a drug-induced coma. Is this Gatekeeper’s dirty work? Or is there a new big ugly in town?

One thing’s for sure…Gunn’s life won’t be going back to normal any time soon.

The Gunn Files series continues with Overdose, a rollicking sci-fi mystery filled with wonders and curiosities. If you’ve ever asked yourself what it would be like to have aliens living among us – or you’re a fan of Men in Black, The X-Files, or Fringe – buy this book!