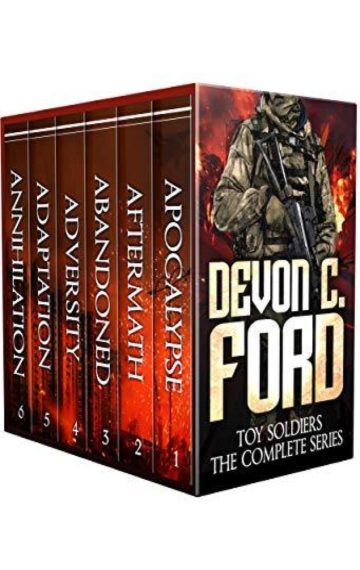 Get the Toy Soldiers Box Set, featuring all six books in this Amazon bestselling series. Nearly 2000 pages of suspense-filled, post-apocalyptic fiction about survival against all odds. Special 99-cent Launch Sale!

The only thing worse than death, is living in hell on Earth…

Disorder and chaos ravage London when thousands are contaminated by the accidental discharge of an experimental bio-weapon. The disease robs its hosts of rational thought, giving them a singular desire—find more living flesh to infect.

Cut off from information and senior leadership, one squadron of soldiers under the command of their senior NCO, Sergeant Major Johnson finds itself forced to operate independently until the remnants of military and government command re-establish themselves safely at sea in the English Channel.

But not every survivor is equipped to survive like them. Civilians have to do whatever it takes to make it.

As it dawns on those left behind that the rest of the world has turned its back on them, they must cope with the realization that they are alone in their fight against the mindless brutality threatening them at every turn. It isn’t only the infected this time. The rest of the planet now sees nuclear action as the best viable option.

If you’re a fan of Bobby Adair, Jack Hunt, Mark Tufo, or World War Z, you’ll love the Toy Soldiers Series from Devon C. Ford, the bestseller author of the After it Happened Series. Don’t miss your chance to grab the entire series today for a low price in this special edition omnibus.