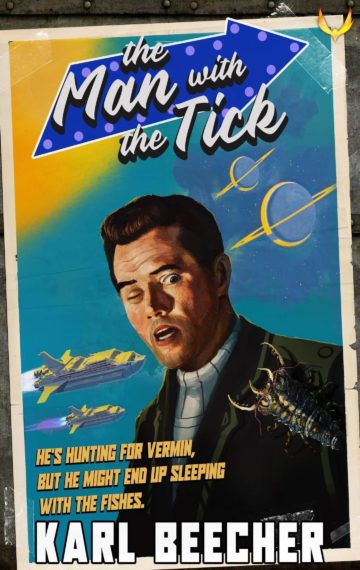 Choosing between justice and ambition can be tougher than a…really tough thing.

J. J. Tiffin had it all: an ordinary apartment, a mediocre reputation, and a mid-level position in a bureaucratic police force. But then one day a mission went sour and he lost it all.

Now he’s fighting to win it back.

To prove himself the galaxy’s finest law officer, Tiffin goes to bring justice to the crime-ridden world of Kappa Nostra. Braving the bent coppers, corrupt politicians and murderous gangsters, he goes undercover as a private investigator, unably assisted by fellow ex-cop Mokk, a man who thinks a SWAT team’s job is to deal with flies. However, things quickly escalate when the routine case of a philandering husband lands him on a murder charge. Digging deeper reveals an evil, galactic conspiracy tracing right back to the thing he loves the most.

Tiffin must cross the galaxy, expose the truth and face the dilemma of pursuing justice or personal ambition, all the while struggling against fearsome mobsters, interstellar assassins and a mastery of metaphor worse than a…than a…man who is poor at metaphors.

Hold onto your pants. Book 3 in the hilarious Interstellar Caveman Series has arrived.