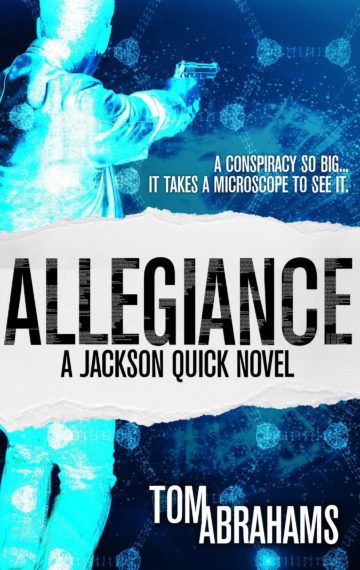 A conspiracy so big, it takes a microscope to see it.

Beer, redheads, and politics… Jackson Quick should have known better. First, he trusted a Texas politician. Then he fell for a leggy woman. Worst of all, he drank a beer that tasted funny.

Now, he’s running for his life and trying to save the world.

When Quick is kidnapped and interrogated about the encrypted tech he’s been charged by his powerful boss to deliver, he has no idea it’s connected to a missing research scientist on the verge of an earth-shaking breakthrough. Nor is he aware of its proximity to the attempted assassination of a political candidate.

In order to stop the unthinkable from becoming a reality, he’ll have to piece the mystery together.

Allegiance is book one the trilogy of Jackson Quick Sci-Fi Adventures and introduces the unwitting hero with a secret past and a penchant for uncovering the truth. It’s perfect for readers of Michael Crichton, Pierce Brown, and John Scalzi.