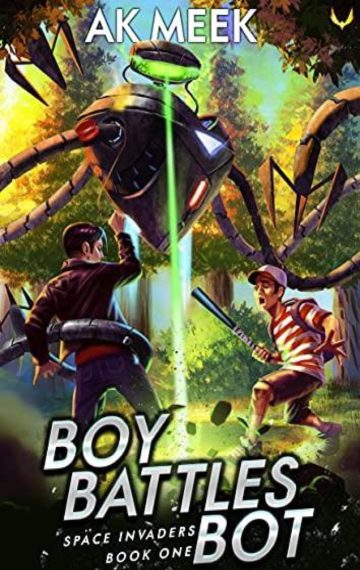 Both kids and adults who love video games and B-movies will love this first installment of the Space Invaders series about 10-year old Jimmy and his quest to save the world!

Something strange is happening in Apple Valley…
…and it all begins one night when ten-year-old Jimmy sees a mysterious object crash to Earth.

Investigating, he finds an alien bearing a dire warning. A sinister force is on its way to take over the planet. Already its minions are infecting Apple Valley like a virus.

But all is not lost. Jimmy receives special powers to battle the impending doom. His quest to annihilate evil leads him to cities overrun with strange robots and hostile animals, to spooky cemeteries where things claw their way from the ground, and to a carnival that should’ve been shut down years ago for safety violations.

Late night B-movie indulgences, eye-searing video game marathons, and a lifetime of mindless consumerism give Jimmy the skills to get the job done. He must hurry because summer break’s almost over. Then it’s back to school. If there’s a school left…

Experience a video game world brought to life that answers the unasked question: What if a ten-year-old was called upon to save mankind from alien robot invaders? For all those who love GameLit Fiction, Earthbound, Trapped in a Video Game, or any ’90s RPG video game.

Blow on the cartridge and pop it in the console!