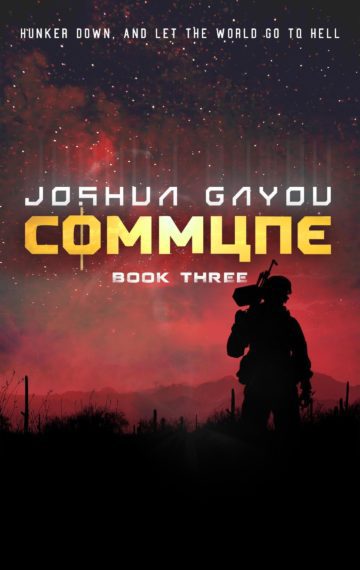 Hunker Down and let the world go to Hell.

Having been bolstered with supplies sufficient to carry them through the winter, the survivors of the Jackson commune must now hunker down and endure the bitter Wyoming winter. But as they flourish, hungry eyes are set upon them throughout the west.

The leftovers of the US Military encamped in the last known surviving tent city, the Elysium Fields of Arizona, hear word of large number of survivors in Wyoming who have begun to rebuild civilization with plans for farming and real shelter. Their commander, Otto Warren, sees this as a chance to take control of a base for exploring the Pacific Northwest.

While in Nevada, a clan of ruthless scavengers grows ever larger, each day bringing them a step closer to collapsing under their own weight. They need more, and the settlement in Wyoming just might be the perfect place to hit.

Resources are becoming scarcer by the day as the world trudges on, and the Jackson commune is sitting on prime real estate.