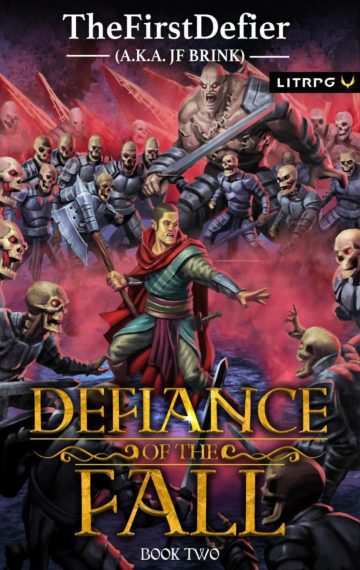 Listen to a sample
$5.99Buy NowRead a SampleSee the ReviewsSee the Full Series

Earth is crumbling from the pressures of not only the invaders, but from nature itself…

Zac has managed to secure his island for the time being, growing into a true powerhouse through his endless struggles. However, becoming the strongest man in the world does not come without complications.

A target has been placed on his back. Natives, aliens—everyone has their eye on the throne. Even the System itself seems intent on forcing him into one desperate situation after another.

Zac knows he is running against the clock in his mission to find his family, prompting him to set out to New Washington in search of answers. Meanwhile, powerful beings from a long-forgotten cult gather in the dark, their goal unknown.

Don’t miss Book 2 of the hit Defiance of the Fall LitRPG series with over 20 Million views on Royal Road.

About the Series: Jump into a System Apocalypse story that merges LitRPG elements with eastern cultivation. Class systems, skill systems, endless choices for progression, it has everything fans of the genre love. Explore a vast universe full of mystery, adventure, danger and even aliens; where even a random passer-by might hold the power of a god. Follow Zac as he struggles to stake out a unique path to power as a mortal in a world full of cultivators.