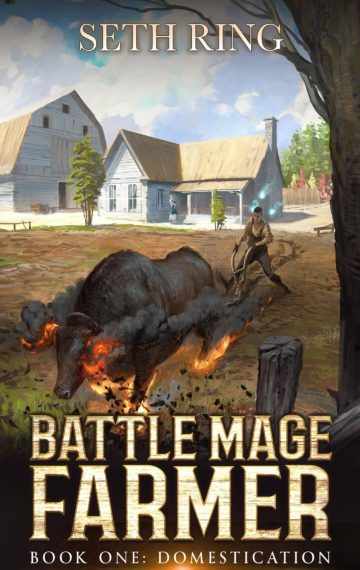 Listen to a sample
$4.99Buy NowRead A SampleSee The Full SeriesBuy The Audiobook

A world on the precipice of the apocalypse. A secret forged in the flames of war. A chance to start over.

For John Sutton, only one of those three things matters.

Retired from a decade of brutal war, he wants nothing more than a quiet pastoral life while he does his best to stem the steady increase of his Doom Points before they hit 100, signaling the start of the end.

He’s been given a small farm on the outskirts of the empire as a thanks for his service, but no matter how far he travels, it’s impossible to escape the war’s devastating effects on the world.

Bandits, suspicious townsfolk, a mysterious pair of siblings, and a secret that lurks in the mountains all threaten John’s peace. It will take all of his considerable power to keep from burning everything to the ground.

Don’t miss the start of the next great Fantasy LitRPG Series by Seth Ring, author of Nova Terra.

About the Series: Mixing slice-of-life with epic fantasy action, mystery, magic, cultivation, and a broken game system that seems determined to make everything as hard as possible for the already overpowered protagonist, this LitRPG/GameLit series is perfect for readers who enjoy exploring rich worlds and complex characters.

“Domestication blends action, monsters, farming, and apocalyptic quests as it introduces the LitRPG genre to a new era of storytelling. One of my top 10 LitRPG Reads ever!”–Benjamin Kerei, author of Oh, Great! I was Reincarnated as a Farmer.