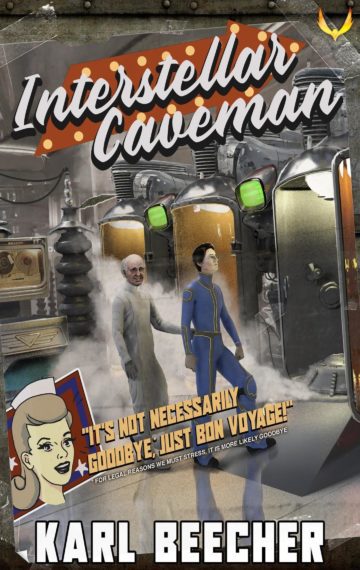 You think you’re struggling to find your place in the universe?

Consider poor old Colin Douglass, a terminally ill insurance agent who awakens from centuries in cryogenic freeze to find Earth is a devastated wasteland. Now, he’s being pursued by a homicidal interstellar tourist board, and calculating insurance dividends is as outdated as making stone axes.

Sci-fi-hating technophobe Colin embarks on a desperate struggle to find a cure for his illness, as well as a place for himself in this strange new galaxy where toilets talk back, and door handles are a long-forgotten relic. Only by teaming up with his rescuer, hard-boiled, space-traveling archaeologist Tyresa Jak (that’s Doctor Jak to you), can Colin hope to succeed before time runs out.

Along the way, this galactic odd-couple must evade the Erd Tourist Board – a powerful mega-corporation which will do anything to ensure the mythical Earth stays mythical – and deal with a crackpot religious cult who not only possess a cure for Colin’s illness, but who also believe there is more to this caveman from Earth than meets the eye….

Don’t miss the start of this side-splitting intergalactic adventure that will keep you laughing into the night. It’s perfect for fans of Guardians of the Galaxy, The Hitchhiker’s Guide to the Galaxy, and Space Team.