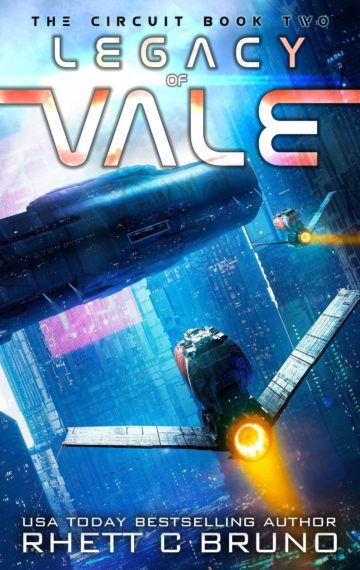 War threatens to destroy the Circuit once more…

After arriving on Ceres Prime, ADIM, is hesitant to help the Ceresians. Their hatred for his creator will never wane, and he starts to understand the danger all of Cassius’ many rivals pose. How can he keep him safe?

When Sage Volus finds herself a captive of Cassius Vale, she begins to struggle with her role in the coming war, and what exactly it means to be an executor. The removal of her cybernetic implant reveals emotions she thought she’d buried too deep to be found. She must make a decision on who she truly wants to serve.

After breaking free of the solar-ark Amerigo and certain death, Talon Rayne finds himself in unusual company. His quests to hold his daughter again will bring him to places he never thought he’d go―into the very arms of his people’s most hated foe.

As the battle grows ever closer, threatening the all-out war that could annihilate millions, these four must determine what part they intend to play, who they will align themselves with, and what it means to be human in a solar system where that means less and less.

Don’t miss the explosive sequel to Executor Rising in this space opera series perfect for fans of The Expanse and Battlestar Galactica.