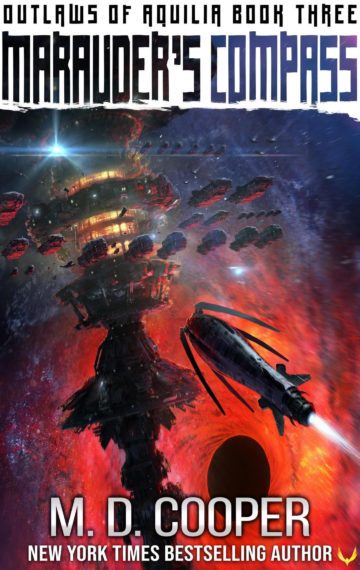 Jax and the crew of the Lightning Runner have narrowly escaped Sinclair and her DSA fleet, but their troubles are far from over.

The flight from Iydra Station has depleted their antimatter reserves. Without resupply, they’ll have limited options should they run into trouble again—which they fully intend to do. With numerous parties hunting for their ship, Jax must choose their haven carefully.

Penny knows of a secret city within a dwarf planet where they take refuge. However, it doesn’t take long to discover that their enemies have yet again increased in number. With several of the crew captured and the ship trapped, their options are few and drastic.

The mission to infiltrate the Paragonian outpost is in dire jeopardy and Jax must consider making the ultimate sacrifice in order to achieve victory.

And if he fails, all Aquilia will be swept up in war.

The epic finale to M.D. Coopers Outlaws of Aquilia space opera series. You won’t want to miss this one!