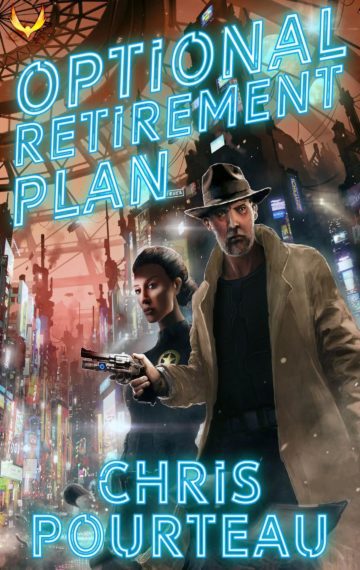 When retiring isn’t an option, it’s kill or be killed.

Stacks Fischer is a killer for hire. For more than three decades, he’s loyally served the Syndicate
Corporation as its most-feared and respected enforcer around the solar system. He’s buried the company’s dirty laundry six feet deep, no matter who had to be taken out to do it.

Now, Stacks has a problem—he’s losing his mind to an incurable form of dementia, and unwittingly spilling corporate secrets in public.

When SynCorp decides Fischer has outlived his usefulness, they decide it’s time to permanently retire him. But Stacks isn’t quite ready to go. With every one of SynCorp’s Five Factions gunning for him—and his own mind slowly rebelling—Fischer leads a pack of would-be assassins in a final, deadly chase across the solar system.

The old hitman refuses to fade quietly into oblivion at the hands of his disease or the business he’s dedicated his life to. He’s choosing an Optional Retirement Plan.

Don’t miss this pulse-pounding science fiction thriller filled with twists that will leave you on the edge of your seat. It’s perfect for fans of Titanborn, The Expanse, and Minority Report.