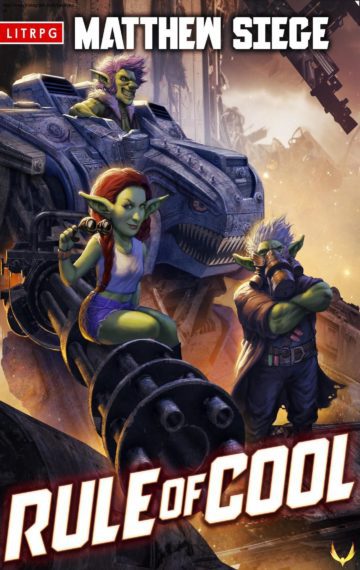 “Fun, funny, and full of heart.”–Felicia Day, Actress, Gamer, and Goddess of Geekdom

Raze is ‘just’ a lowly Gearblin, chained to the quest-giver desk at the only arcade in town.

That sucks for her. It means that she’s a Non-Participating Citizen, someone who can’t see her stats or make opposed rolls against Heroes. It’s why her life’s worth less than the vendor trash she doles out.

The old-timers swear it didn’t used to be like this—that their issues only began once RNGesus went AFK a thousand years ago, leaving the questionably-blessed Heroes to conquer everything without consequence.

Fortunately, Raze is not about to let something as trivial as a millennium of injustice cramp her style. She’s got a crush on a frustratingly optimistic dreamer, and when he talks her into using the Konami Code as a map to scale the conveniently located and suitably forbidden fortress, everything changes when they reach the top.

What follows is Raze and her mismatched crew doing their damndest to burn the new ‘old’ ways down to the ground, squaring off against thousands of noob Heroes in epic, crunchy, badass, mechanized carnage!

Rule of Cool is a screaming love letter to LitRPG and the possibilities the genre embraces. Hilarious, action-packed, and filled with unforgettable characters, it’s perfect for fans of Ryan Rimmel, Dakota Krout, and Shemer Kuznits.