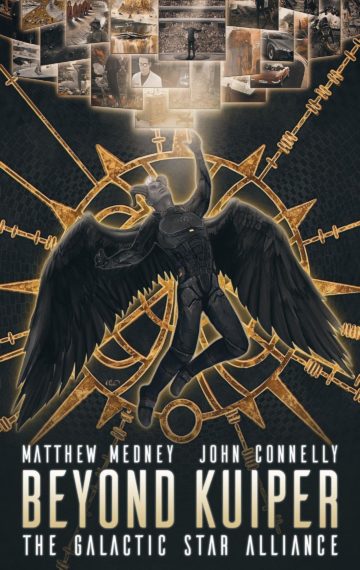 There is no Drake Equation. There is no question on sentience. The galaxy is alive and filled with life. The only issue: we humans aren’t invited.

In this novel co-created and written by Matthew Medney (Heavy Metal Magazine CEO and NYU adjunct professor) and John Connelly (Lockheed Martin Aerospace Engineer), humankind acknowledges the vastness of time, the cyclical nature of civilization, and the obscurity of our own history.

If our galaxy is so full of sentient life, why has no one said hello? We thought of a simple, logical reason: no one wants to.

The Galactic Star Alliance has been alive and well for millions of earth years. Hundreds of thousands of worlds and trillions of beings move across the many home worlds of the Alliance. This revelation led to many questions: How is faster-than-light speed travel possible, and could cohesive, interstellar civilizations exist without it? Is it conceivable to govern a coalition not of different countries, but of different species? As for the title, from where would our judges watch us?

But our galaxy has spoken to us humans. There are some who believe it is out there. Not as science-fantasy but as science.

We introduce Bernard William Hubert. World renowned astrophysicist, and lead scientist of the seminal company of exploration, Outer Limits. While on loan to CERN, a catastrophe of unimaginable proportions leaves Bernard as the sole survivor. While the scientific community and world looks to him for answers, he simply states the unthinkable: “It has to be aliens.” Inconceivable to the world, the Hubert family is investigated and his family’s name tarnished.

Disgraced and shunned, Bernard claws his way back into the equation with his new company C.O.R.E. as they work tirelessly to design an engine capable of interstellar travel.

Follow Bernard on his road to redemption and discovery in this ensemble cast of futurism, space travel, and the fate of our species. It’s perfect for fans of everything from Star Trek to Mass Effect.

What Others Are Saying