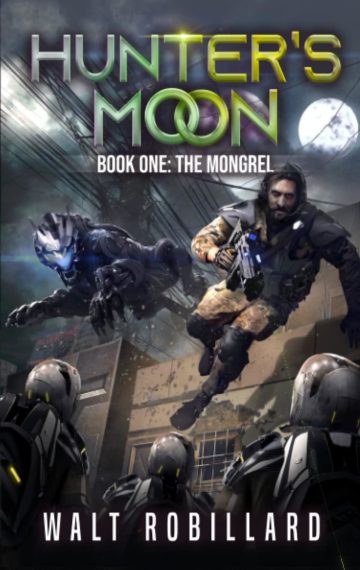 In a lawless galaxy, justice is only a blaster bolt away.

Beyond the Outer Boundary of the Core Worlds lies the Frontier. Colonists looking for a life outside the corporate choked governments, cross the border seeking new opportunities, trading security for freedom.

In the Frontier, law is absent except for the Marshals. The warrior mystics saved Orin Lashra from a grinding death in the gladiatorial slave pits, recruiting him as a deputy to serve beside them. During a routine tribal negotiation, violence verging on civil war kills the mentor he called mother. Rising from a grave he wouldn’t accept, Orin embarks on a path of brutal revenge, determined to draw the Marshals and their elite Lancer Regiments into the conflict.

Join Orin in his struggle against disciplined Marshals, relentless Lancers, and shadowy threats to find those responsible for her death and crush them for their mistake… Never hunt what can hunt you back.

Hunter’s Moon: The Mongrel blends military science fiction with hard core space opera to weave a tale of brutality and blasters. Fans of Killjoys, Star Wars and Dark Matter will fall right into the cockpit for an adrenaline-filled thriller that never lets up on the throttle.