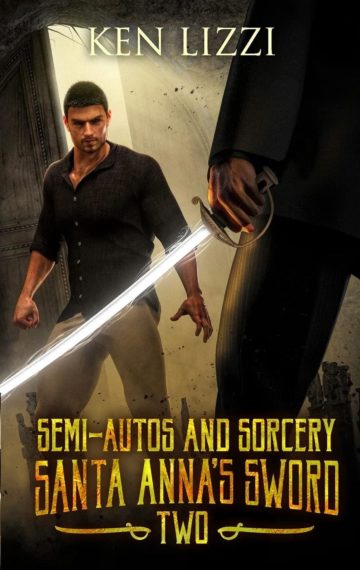 Santa Anna’s sword is cursed. Nonetheless, people are willing to kill to possess it.

A witch cursed with both deformity and long life seeks the sword to lift her curse. A curse eater wants to employ the power of the sword for revenge. A secret order wishes to sequester the sword away in a private vault.

Karl Thorson, ex-Special Forces soldier, becomes embroiled with all three parties when Sasha Jackson, an art expert and the sister of an old army buddy of Karl’s, asks him to accompany her to determine the provenance of an antique sword. The witch, Mary Pierce, will go to any lengths to relieve her curse. Silvanus Bosch, curse eater, has vowed to help. But he has goals of his own. Virgil Hamilton and his heavily armed crew will expend any amount of ammunition to secure magical artifacts. Karl Thorson is merely angling for a date with Sasha. That is, if her brother doesn’t mind.

Can Karl retrieve Santa Anna’s sword? Can he free Sasha from kidnappers? And, who brought in werewolves?

Don’t miss the second book in the Semi-Autos and Sorcery series. It’s what fans of Larry Correia and Jim Butcher are hungering for.