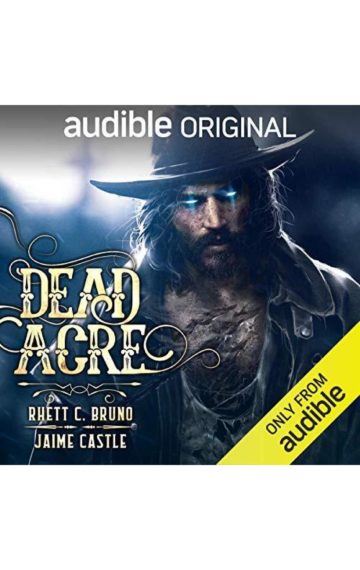 Listen to a sample
Buy Now

The Witcher meets the The Dresden Files in this Weird Western tale by the Audible number one best-selling duo, performed by Roger Clark (Red Dead Redemption 2’s Arthur Morgan).

James Crowley met his mortal end in a hail of gunfire. Now, he finds himself in purgatory, serving the White Throne to avoid falling to hell. Not quite undead, though not alive either, the best he can hope for is to work off his servitude and fade away.

His not-so-sacred duty as a Hand of God? Use his new abilities to hunt down demonic beings that have infiltrated the mortal realm.

This time, the White Throne has sent him to the middle of nowhere: a Western town called Dead Acre with a saloon, a moldy church, and little else worth talking about. There isn’t even a sheriff. But the local cobbler has gone missing at the same time as a number of graves were desecrated.

Crowley must follow the clues, all while dealing with a cutthroat gang that treats Dead Acre like they own it, an extraordinary woman who makes it hard to focus, and locals not keen on strangers.

Life isn’t simple for a Hand of God.